Revue d’Histoire du Théâtre • Numéro 271 is devoted to the Chinese language theater, in other words a series of reflections on the shows of the People’s Republic of China, Hong Kong and the Republic of China (Taiwan): diversities, oppositions and sometimes complementarities thus require the plural. Practitioners, directors and researchers, mostly Chinese, have here an opportunity to present an inventory of theater as it occurs today.

Between the patrimonialization of the repertoire and its actualization, between the refusal of commercial entertainment, which is so evident and so profitable, and the obstinacy of a certain experimental theater, between a subsidized and supervised official theater and independent performances supported by various privates, China hesitates open to the culture of the world (especially Western) while emphasis the promotion of a national culture. 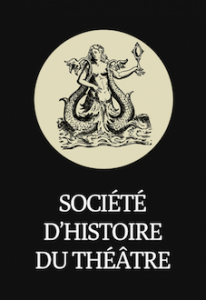 Société d’Histoire du Théâtre was founded in 1932 at the initiative of Auguste Rondel, whose library bequeathed to the Bibliothèque Nationale de France at the origin of the creation of the Department of Performing Arts.

Under his presidency, a group of professors, researchers, scholars, collectors, archivists and theatricals associate together and share their research and work, such as Ferdinand Brunot, Léon Chancerel, Jacques Copeau, Max Fuchs, Felix Gaiffe, Madeleine Horn Monval and JG Prod’homme.

This is how the Société d’Histoire du Théâtre was created, an espace dedicated to collecting, preserving, transmitting and analyzing documents and archives on the history of theater and theatrical life, in France and in the world. 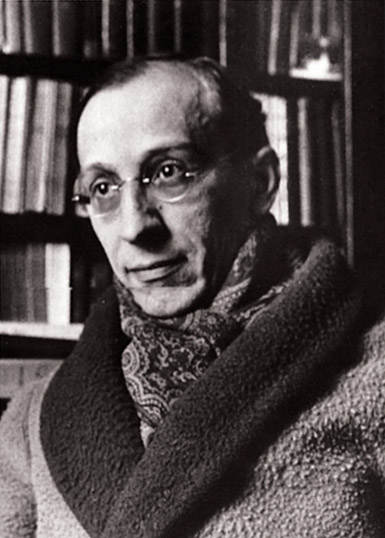 «For many people, the history of the theater is reduced for analysis on the printed works. […] The history of the game, the decor, the machinery, is little known and somewhat disdained. “. “Our society wants to bring people come closer to the library and the comediens on the plateau, to make a breach in the great wall of China that separates the history of dramatic literature and the history of scenic art »

Revue d’Histoire du Théâtre is a quarterly journal, created in 1948 and supported by the General Director of Artistic Creation (Ministry of Culture) and the National Library of France. It publishes unpublished texts before, endeavoring to convey the history of the performing arts from the Middle Ages to the present. 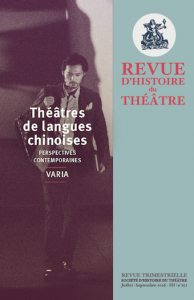 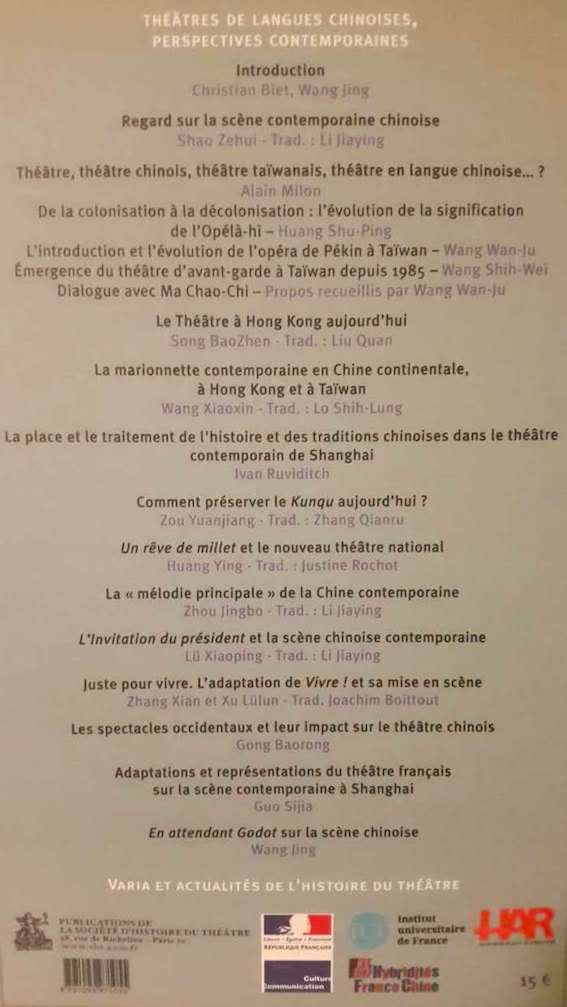 The theater mentioned here is the theater in Chinese languages, in the plural, because the aesthetic and political diversity of the theaters is important to consider. Repertory theater or contemporary theater, patrimonial or dynamic repertoire, profitable commercial entertainment or financially supported experimental theater, subsidized and independent theater or supervised state theater, patronage or sponsorship, opening to the cultures of the world (especially Western) or preferring to promote a national culture, the unification of the cultural field or recognition of a series of cultures on several territories, the theater in Chinese languages hesitates and has not yet chosen where to go. 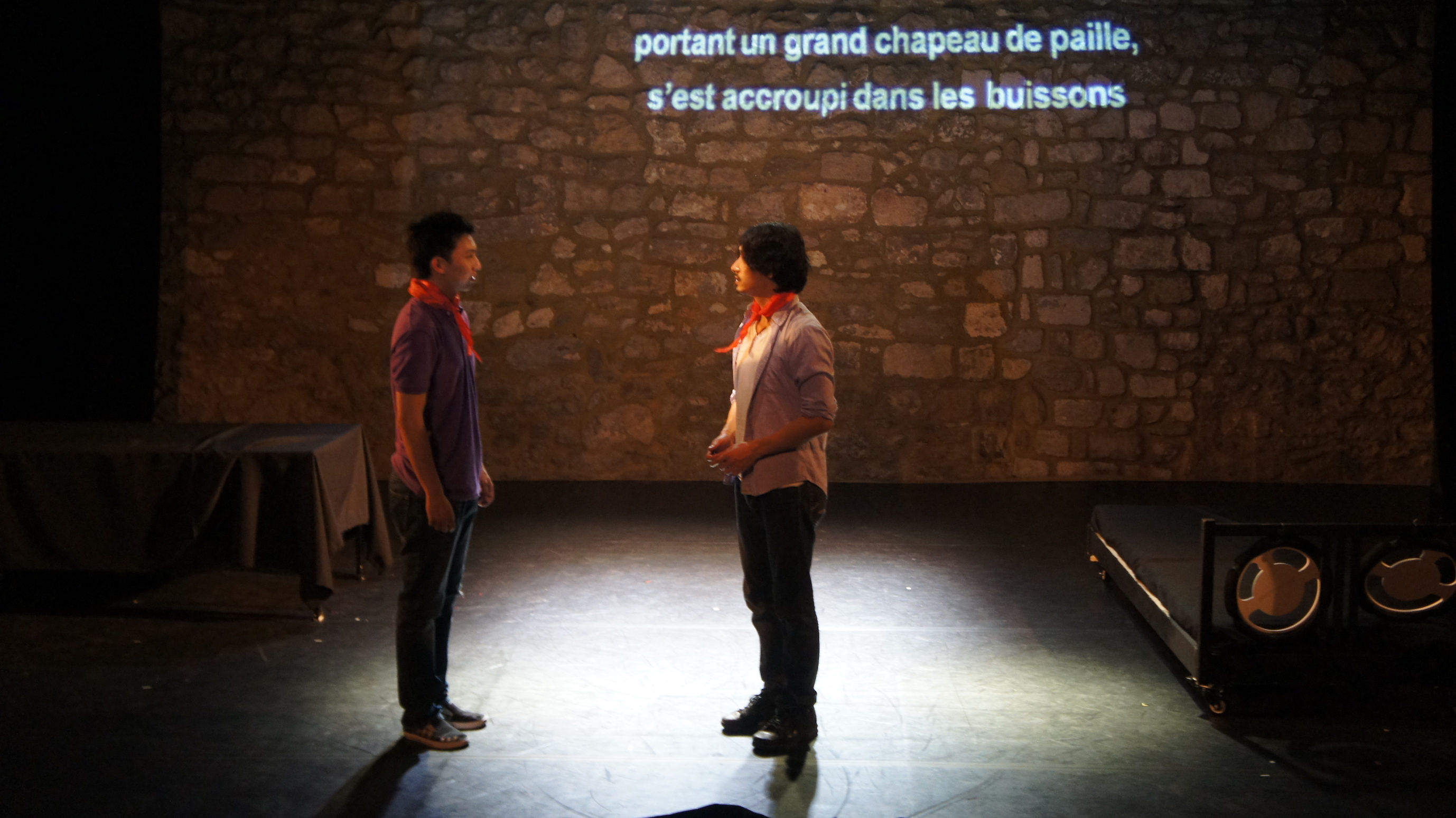 A glance of the Chinese contemporary theater

This article shows three trends of the Chinese mainland theater: the creations of the “main melody”, in other words the theater submitted to the state, those that can be called “commercial”, and the independent theater, or experimental, which is very difficult to survive. While there has been long time that a certain porosity appeared between these three categories, it is regrettable that commercial theater, for the moment, sometimes imposes itself on the detriment of reflection and simply the thought.

1. From Colonization to Decolonization: The Evolution of the Significance of the Opeala-hì Huang Shu-Ping

2.The introduction and the evolution of Beijing Opera in Taiwan Wang Wan-Ju

3. Emergence of avant-garde theater in Taiwan since 1985 Wang Shih-Wei

After examining the orientalist analysis of the French intellectuals for the 70s, the intention of these articles is to reflect on the specificity of Taiwanese theater in relation to the influence exercised by traditional Chinese theater. This journey was organized around a reflection on the evolution of the Opélà-hi, on the Chinese opera as the Taiwanese culture approves it, but also around the avant-garde Taiwanese theater for the 80s. The ensemble ends with a glance of an innovative theater company: the Sardine Theater, a theater influenced by Western and Far Eastern countires.

After recalling the history since 1841 and especially in 1909 and the specificities of the theater in Hong Kong, this article shows what have evolved since 1997, the year of the attachment of Hong Kong to mainland China. Even as the theater tends to develop considerably in our period, we must admit that commercial modes dominate. We can also noted that there are many theaters in resistance, including the Hong Kong Repertory Theater, of which some examples of staging have given in this article. It is urgent to think about the relationships between history, theater and politics. 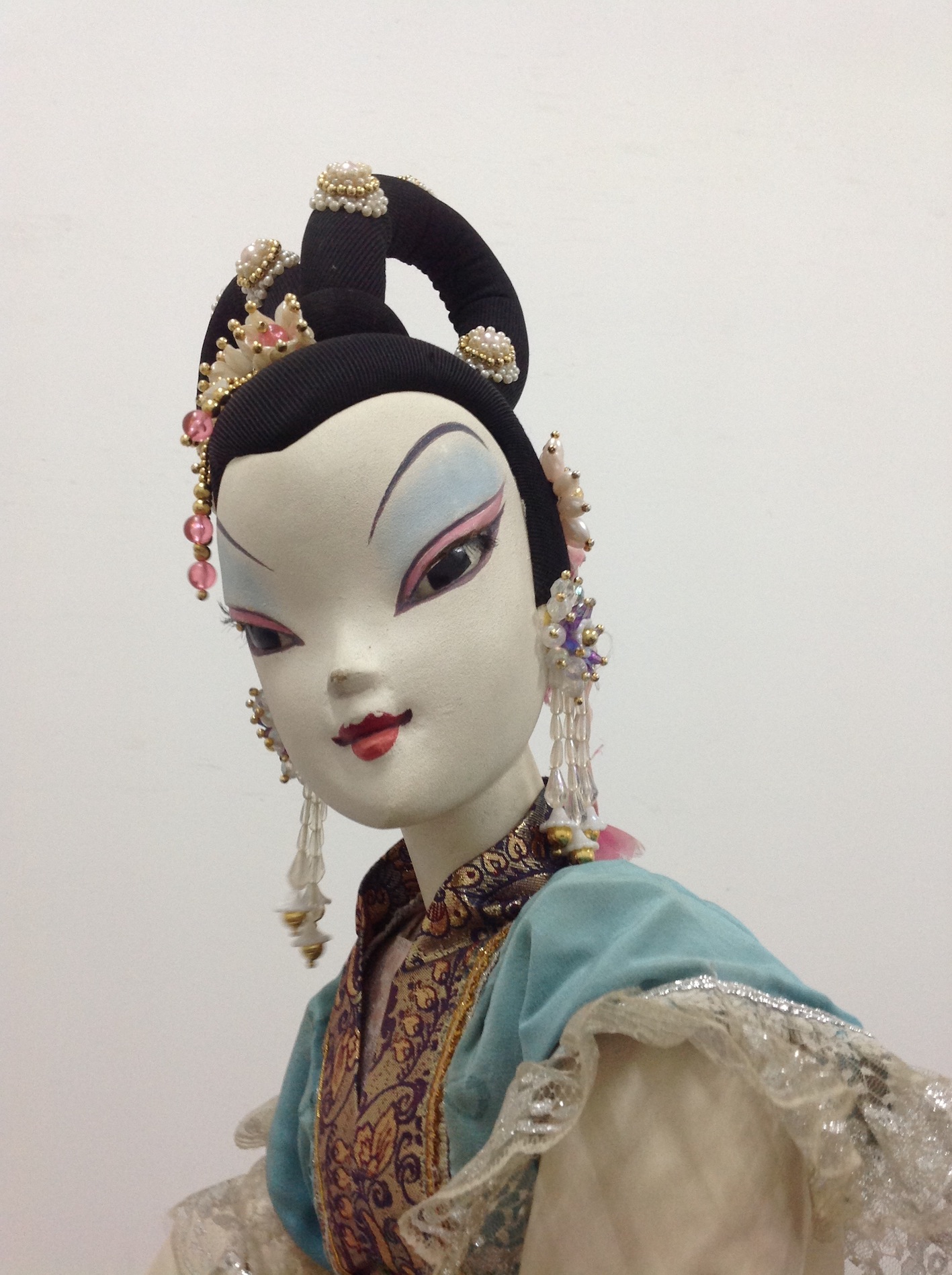 Three of the most dynamic contemporary directors in China, Ma Lu (Mainland China), Ata Wong Chun Tat (Hong Kong) and Cheng Chia-yin (Taiwan) have kept focusing on puppetry performance till today. After a slow disappearance, puppetry performance appears to have new forms, new ways of reflection and a tendency to move away from illusion, realism and art for children. It is in the ostensible practice of the trade, facing the demand for the innovation of technique. 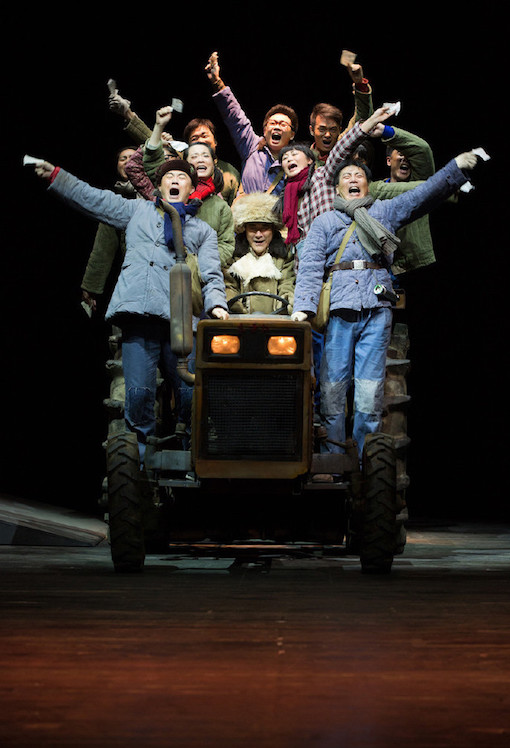 This article presents a number of pieces recently produced by the Shanghai Dramatic Art Center, which is the major theater institution of the city. He is particularly interested in historical plays, not in the more commercial plays or the plays of entertainment, the plays showing the ancient or mythical China and the revolutionary period. History, which is often regarded as a work of art, takes on a major cultural and political dimension sometimes rewritten. The history of China allows the possibility to honor a certain idea of Confucianism, or to serve and believe the Chinese cultural heritage. But by complying with various political injunctions, the history of China was impoverished and its influence delayed the emergence of real artistic theaters. 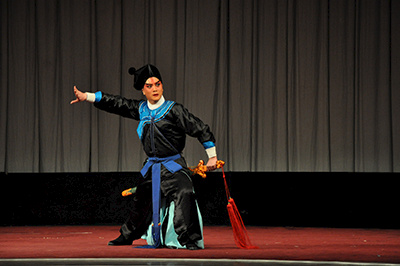 How can we preserve the Kunqu today?

This first article on the Xiju (what is called “the Chinese opera” in France) questions the fact that the techniques and the traditional formations of one of its type, the Kunqu. The Kunqu has been gradually abandoned since 2008 as it has inscribed on the list of Intangible Cultural Heritage of Humanity. Should we reinterpret the classics, or simply try to preserve them as they are? 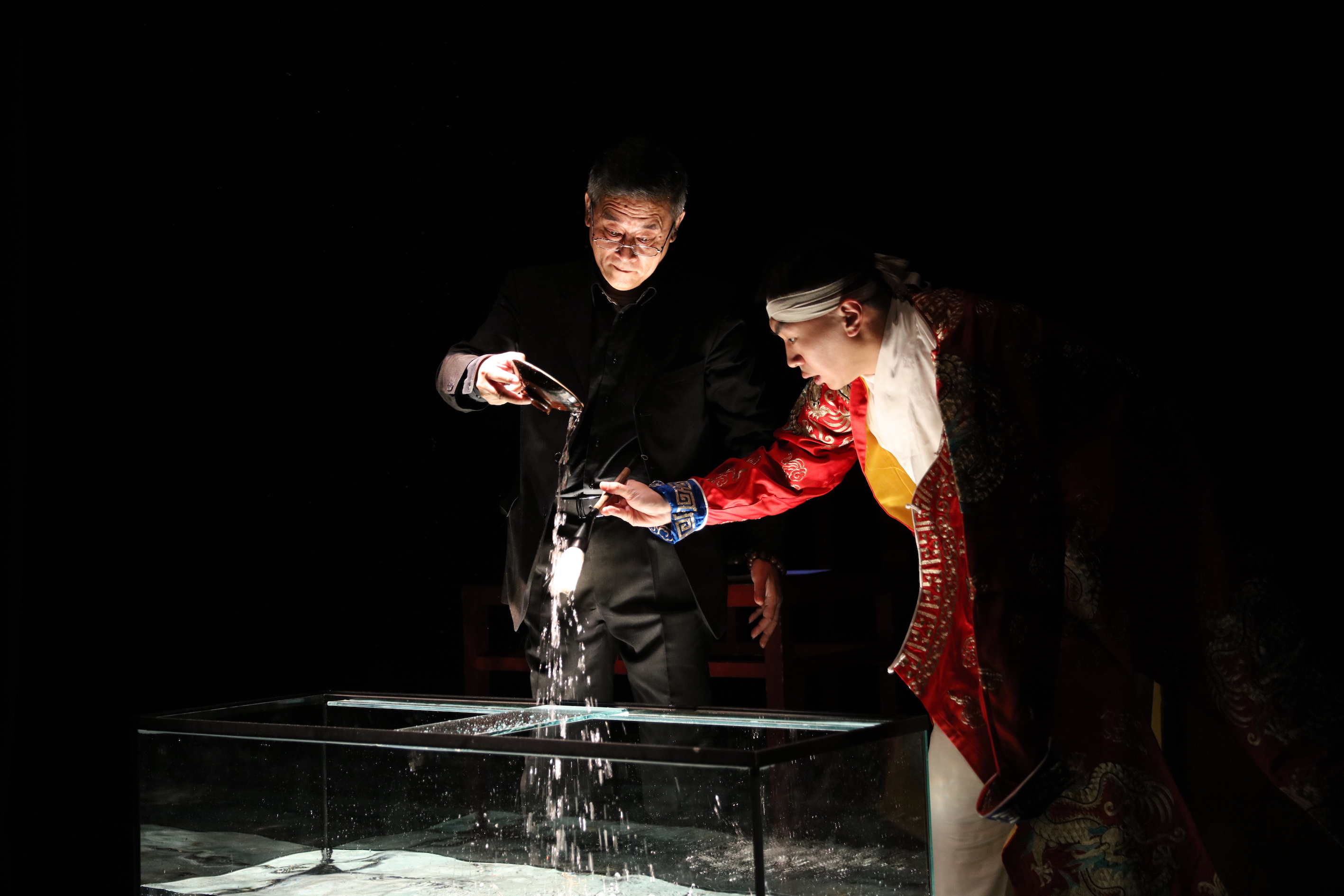 Cooking a dream and the new national theater

The second article shows how the Pekingese director Huang Ying seeks to revisit a history in the 8th century, Cooking a dream with a kind of theatrical anthropology in action, elements of the Xiju with Western references and contemporary background and stage techniques. Yuang Ying referred to the “Movement of a National Theater” at the beginning of the 20th century and then hoped to explore, experiment and create new hybrid forms of theater.

The “main melody” of contemporary China

This article defines the “theater of the main melody” in mainland China, which is the part of the contemporary theater that corresponds to the guideline of the Party of China, while “the mainstream” is the structure of production and the implementation of scenarios, which are officially supported, or tolerated, by the regime and make it possible to obtain the necessary subsidies. During the first thirty years of the communist regime in China, leaders gave their idea, people gave their life, and the writer (or the artist) gave their technique, this model of creation is still alive today, surviving through the creations analyzed and commented on here: in the face of harsh reality, always happy ending, the moral and the Party must be victorious and the scenography makes us impressed …

The President’s Invitation and the Contemporary Chinese Scene

The President’s Invitation is a piece of theater recently written by a young student, Wen Fangyi, and mounted by her teacher, Lü Xiaoping, who won an remarkable success as she formally revolutionized the theater, according to her director. But because it represented the way to plunge under the power of institutions, especially academics, as lots of fiction had taken place at the times of Chiang Kai-shek, and today … 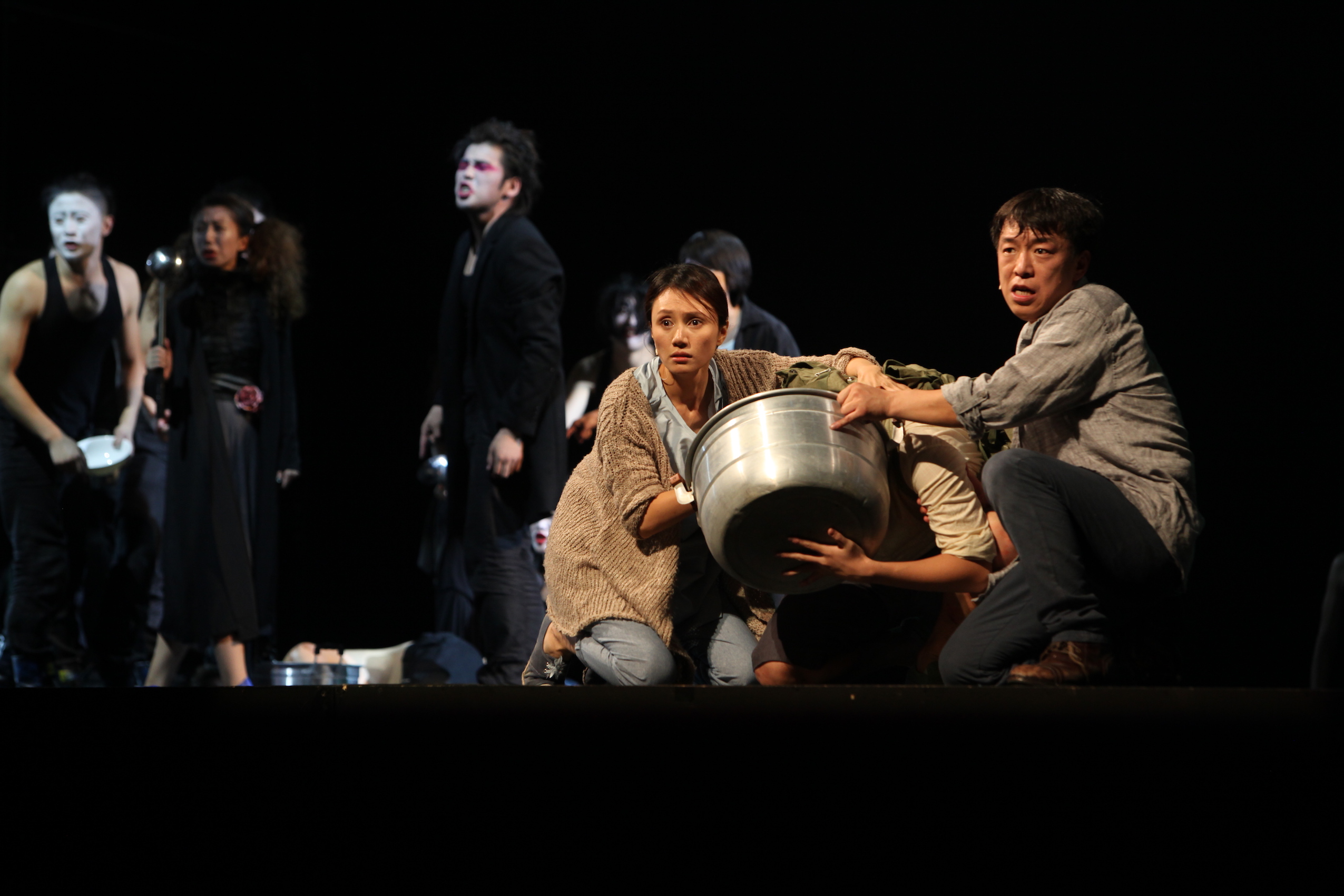 Just for living, the adaptation of Live! and its staging

This article comments on the recent representation of a famous piece of Meng Jinghui that is adapted by the novel by Yu Hua (well known film by Zhang Yimou) published in 1993, Live!. This article not only describes the passage from the novel to the theater, but also shows the way to interpret a romantic history of 20th century in China. 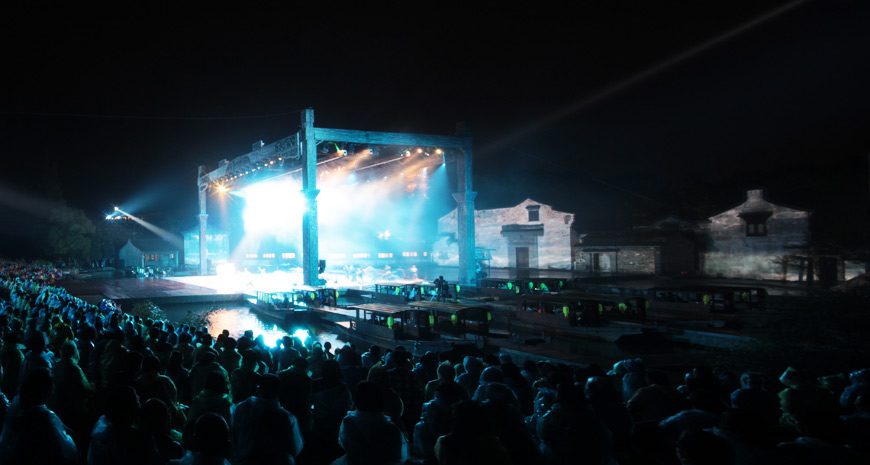 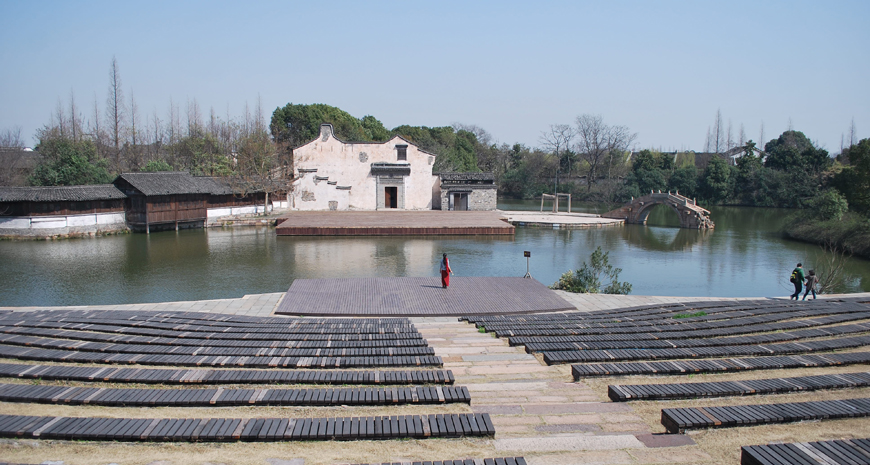 Western shows and their impact on Chinese theater

The idea here is to make a general point about the translations and adaptations of Western performances to Chinese theater, which began with the appearance of oral theater Huaju in the early 20th century and insisted on the “new era” of the 1980s that emphasized the importance of authors like Ionesco, Genet, or Beckett. The new phenomenon in recent years is that foreign artists to China are being invited, majorly the directors of theater. Foreign shows come to the domestic stage, as everywhere on our globalized planet, as international festivals …

It is a question here, how French theater has been represented in various forms on the stages in Shanghai. In the beginning of the 20th century, La Nouvelle Camélia of the 20th century at Tartuffe, the troops firstly adapted the repertoire after a rejection of the western pieces, which were considered politically dangerous. Then a series of pieces of theater (translated) of Sartre, Ionesco, Beckett or Genet appeared in the 80s. From the beginning of the 21st century we saw a series of adaptations of the same repertoire as well as more contemporary pieces (Yasmina Reza), or the adaptation of literary works, such as Le Rouge et le noir. But what marked the contemporary period would rather be the cooperation between French and Chinese artists and the arrival of foreign troops in China. 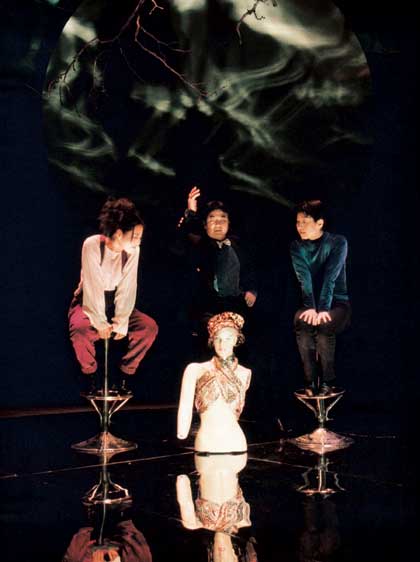 Waiting for Godot on the scene in China

The absurd, as it is understood in China, is a political issue. And the theater of the absurd, particularly as Beckett and Ionesco, which were integrated in China and raised many battles. As this article shows, it was at the beginning of the 1960s that a very official collection of small books with yellow cover, someone intended to make translations of the dangerous pieces showing the decrepitude of Western theater in general. But in the 80s, Chinese theater was able to present the theater of the absurd in order to rewrite it and make it radically critical. Finally, taking as an example Waiting for Godot, Wang Jing shows how Beckett’s text has evolved since, before and after Tian Man men.